"Krugg"
The Witcher - Fanart
"Krugg is an elder witcher preferring the solitary life in the woods, well camouflaged and close to nature - typically seen wielding his massive homemade sniper-crossbow. He prefers to carefully and calmly plan out his attacks from atop, selecting his targets from long range before striking his target. Should he end up in close-combat, a silver sword, his dagger and the wildness of his nature makes sure his prey goes down. "

First of all, I felt it was time to do something thoroughly - and like really thoroughly. Also I wanted to do a full-figure character, practise poses and study materials more in-depth, and really render something to completion, since most of my works are loose and quicker.
Since there hasn't been a witcher from the Cat and  Gryphon-school seen in The Witcher-universe, I thought that was an interesting starting-point. Designwise I wanted to incorporate a lot of things that would resemble the qualities of a gryphon (lion/eagle): The beak-shaped headpiece, feathers, lion fur, eagle-details on knee pads and sword, arm guards and the gryphon medallion hanging from the crossbow.

So this is what happened in the actual process:
I did preliminary sketches for three weeks to really nail a good pose. Ultimately I ended up having a friend take a picture of me in the pose and use that - but the whole sketching process definitely made me loosen up, and was not in vain. Finally I had the good pose, moved onto some quick value/colortests and then I was ready to separate everything into masks. This is something I typically never do - I merge my things all the time - but this time I tried being super strict in my layers, keep them organized, colorcode them - and paint within each mask (see process pictures).

Anyways, everything was ready and setup to ACTUALLY render the picture - and then I procrastinated. Postphoned. Got scared. It's pretty typical - you start having these conversations with yourself, wondering if the piece will actually ever get as good as you imagined and set yourself up to. For this piece I insisted that it had to be GREAT in every aspect - and that's high ambitions to set oneself up to. In the end I thought "Well it's gonna get as good as it gets" - and just began taking the painting piece by piece, step by step - spending 2 hours where I'm totally okay with only having rendered an arm and a bit of a chestpiece. Complete patience. I think that have been a good lesson for me, not rushing it to completion too early.

Towards the end I had rendered out everything in the individual layers, but it still felt a little "not lit", a bit flat, and a bit not fully pulled together as a piece. I got some feedback from people and let the piece rest for a week over christmas. When I came back, I had energy to finish up the last. Yay!

And here a picture of the process: 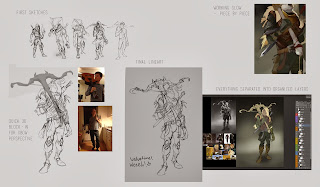 Finally, thanks to all those who've helped me with critique and ideas along the way!
And merry xmas and happy new year to all of you, my readers!

Posted by Benjamin Bach at 6:33 AM No comments:

In school, I've been working on The Trailer Project - and it has been a great experience! I had the role of Art Director, tying together the style and overseeing that it stylisticly came together as a whole. In addition to this, I was being a CG-generalist and was working on lighting, composition etc.
on several shots. Hope you like it!

/B
Posted by Benjamin Bach at 8:02 AM No comments:

Posted by Benjamin Bach at 6:16 AM No comments: 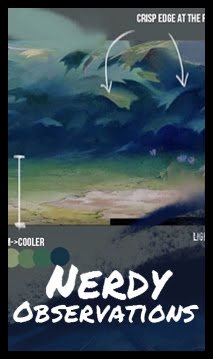